If you have a dog – or know someone who does – you'll understand that many brides and grooms want to share their special days with their pups. Thought of as part of the family, no one wants to leave their precious pooch home while they celebrate with family and friends. Whether you choose to take wedding portraits with your dogs, have them along for moral support before the ceremony, or enlist them with flower girl or ring bearer duties, you'll be happy you made them a part of your big day – especially since they're such a special part of your life together.

Depending on your ceremony and/or reception venue, it may not be possible to include your pet in your special day; however, there's always a way to work with your resources. Can't bring your pup to the ceremony? Incorporate him or her into your getting-ready photos at home or in a pet-friendly hotel room or bridal suite. Worried about your dog eating the food at the reception or getting stepped on while on the dance floor? Have your wedding planner or a close friend or family member be in charge of bringing your pet to a safe location for the duration of the festivities.

While it may seem like just one more thing to think about during the planning process, you'll be glad you took the time to include your favorite furry friend in your nuptials. After all, many couples adopt dogs together before they say "I do" and wouldn't imagine tying the knot without their puppy in tow. Take a look at the brides and grooms below that brought their dogs to their weddings – and even included them in the wedding party! 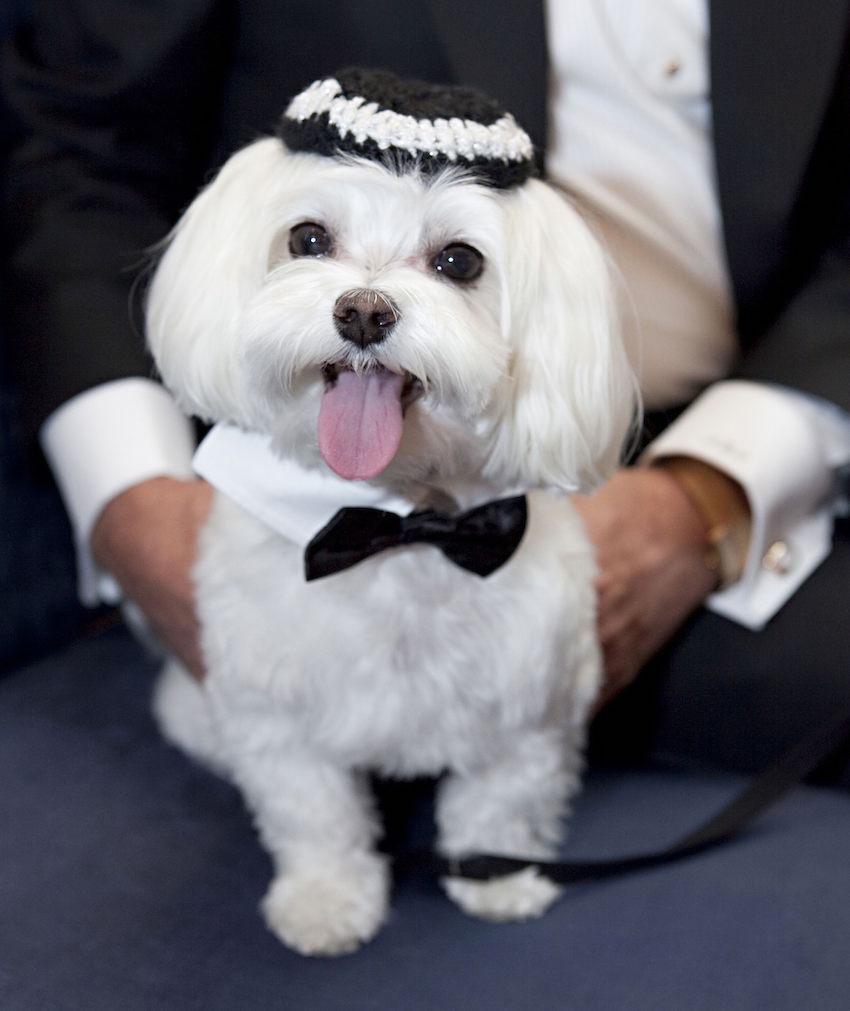 This couple's maltese puppy Bailey wore a bow tie and collar for the couple's Jewish wedding ceremony – he even donned a black-and-white yarmulke! Photo by Gruber Photographers 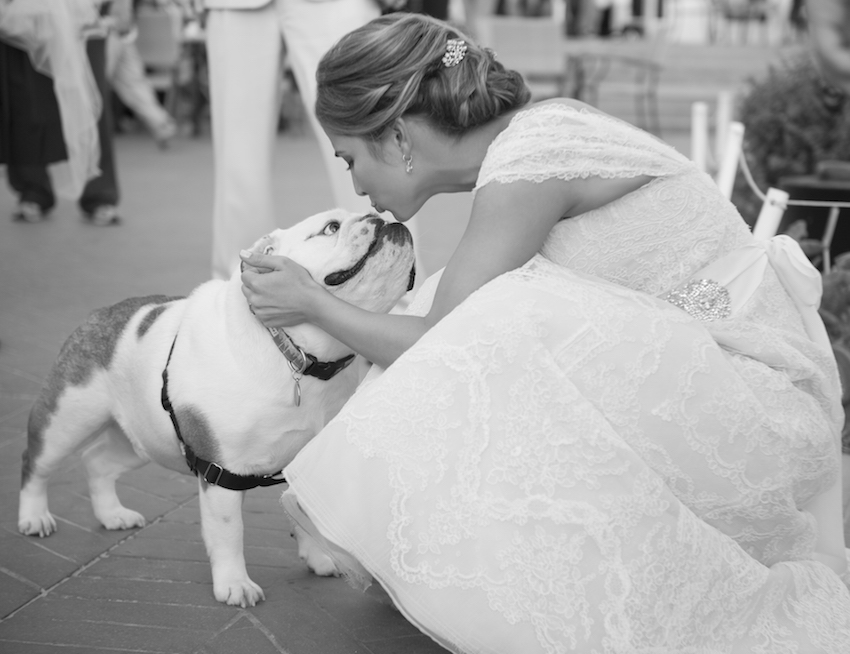 An adorable English bulldog waited anxiously to give this beautiful bride a sweet kiss to wish her well before the vow exchange! Photo by Dalal Photography 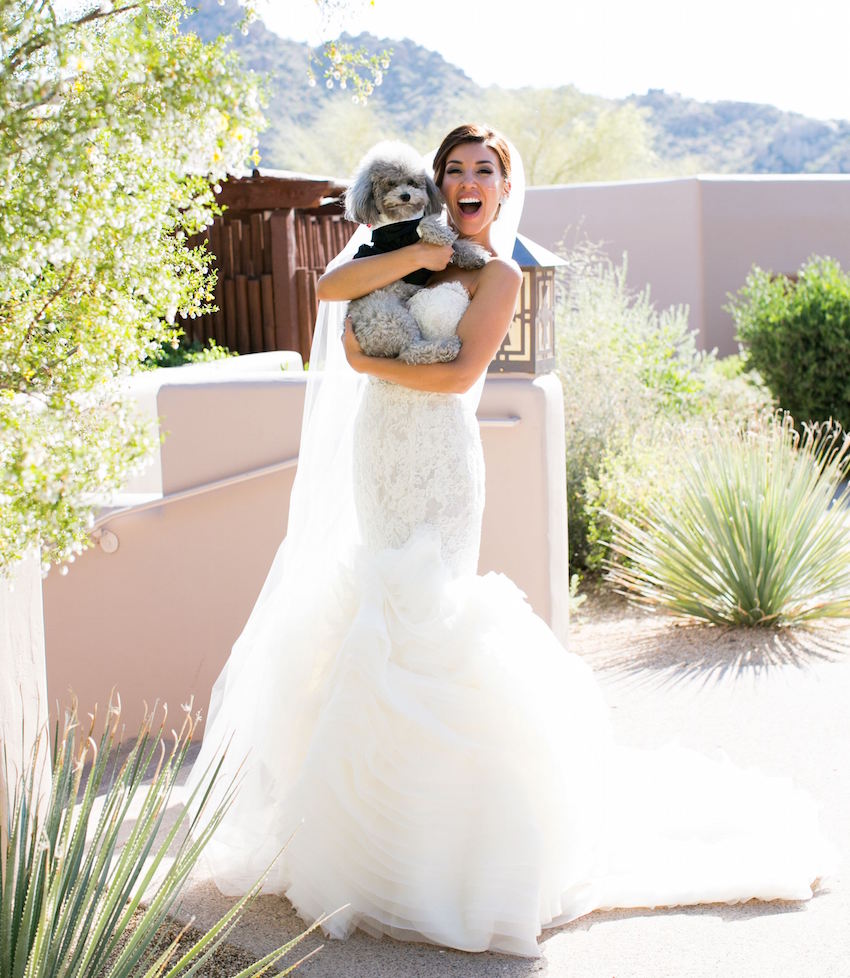 Entertainment host Adrianna Costa and her groom included their grey poodle mix – named Jerry Garcia after The Grateful Dead guitarist – into the ceremony and outfitted him in a tuxedo jacket. Photo by Mi Belle Photographers 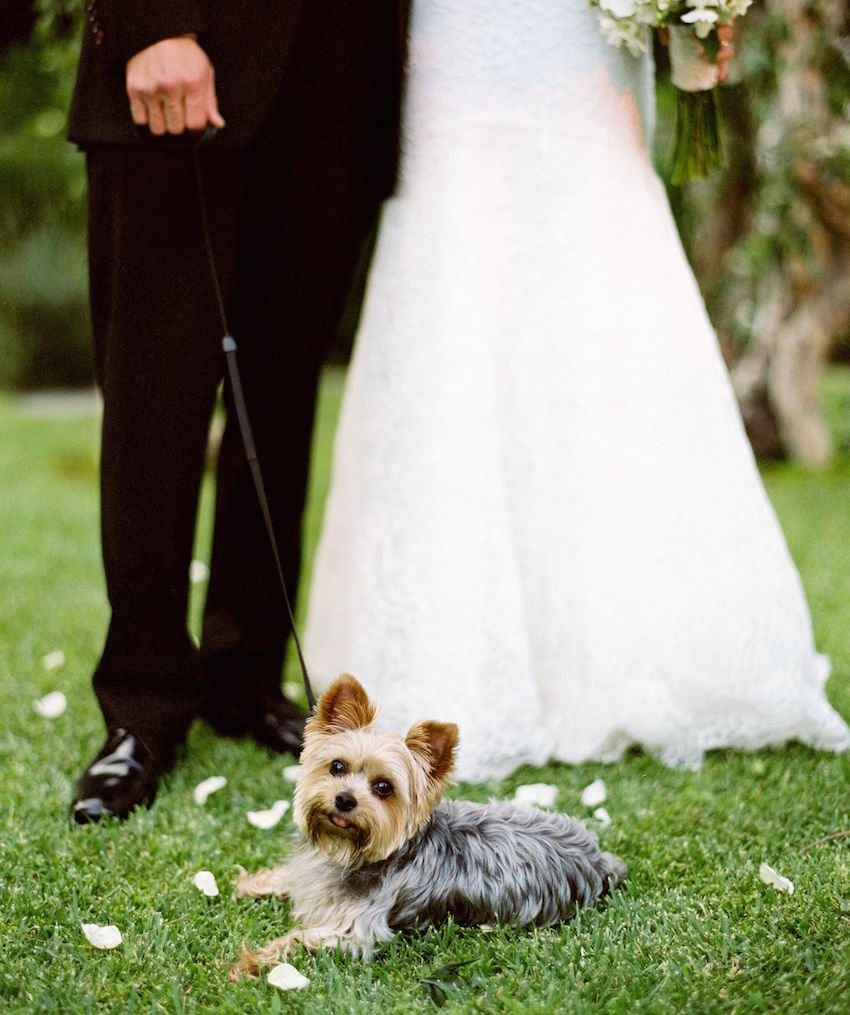 The bride's sweet Yorkshire terrier, who had an adorable puppy cut, accompanied the flower girl and ring bearer down the aisle. Photo by Jose Villa Photography 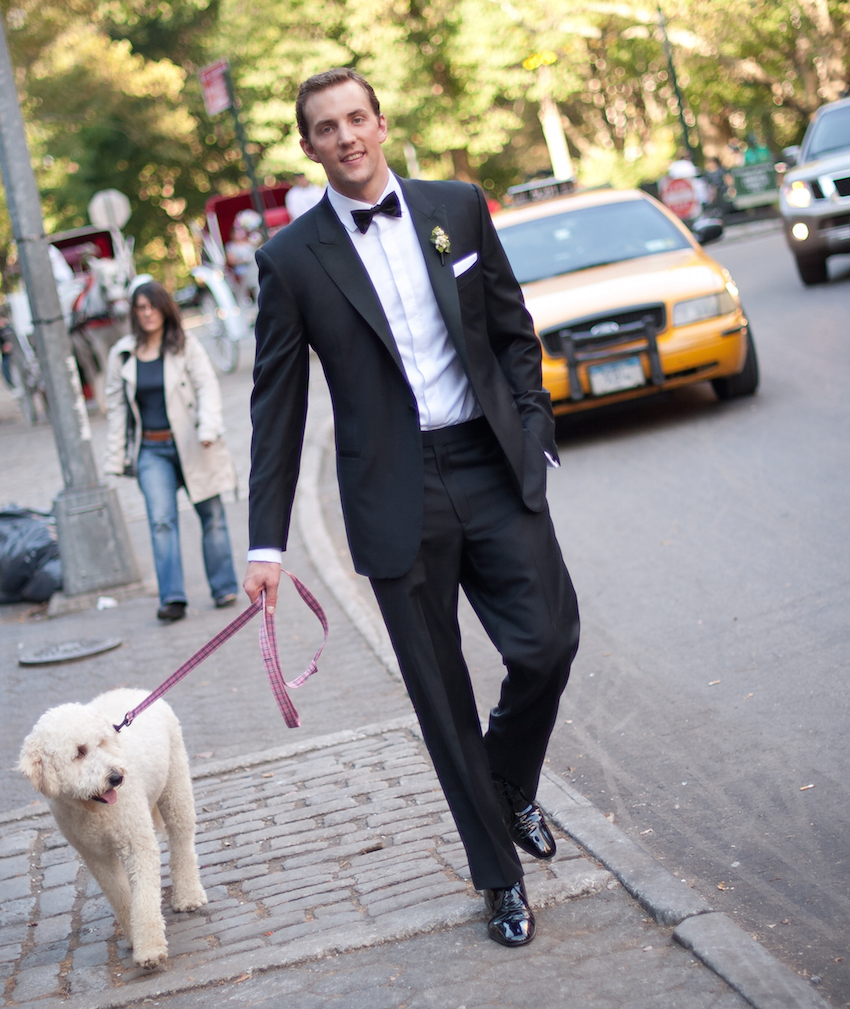 Since the couple could not feature their dog in the church ceremony, the groom took some time before the festivities to walk his pup around New York City. Photo by Gruber Photographers 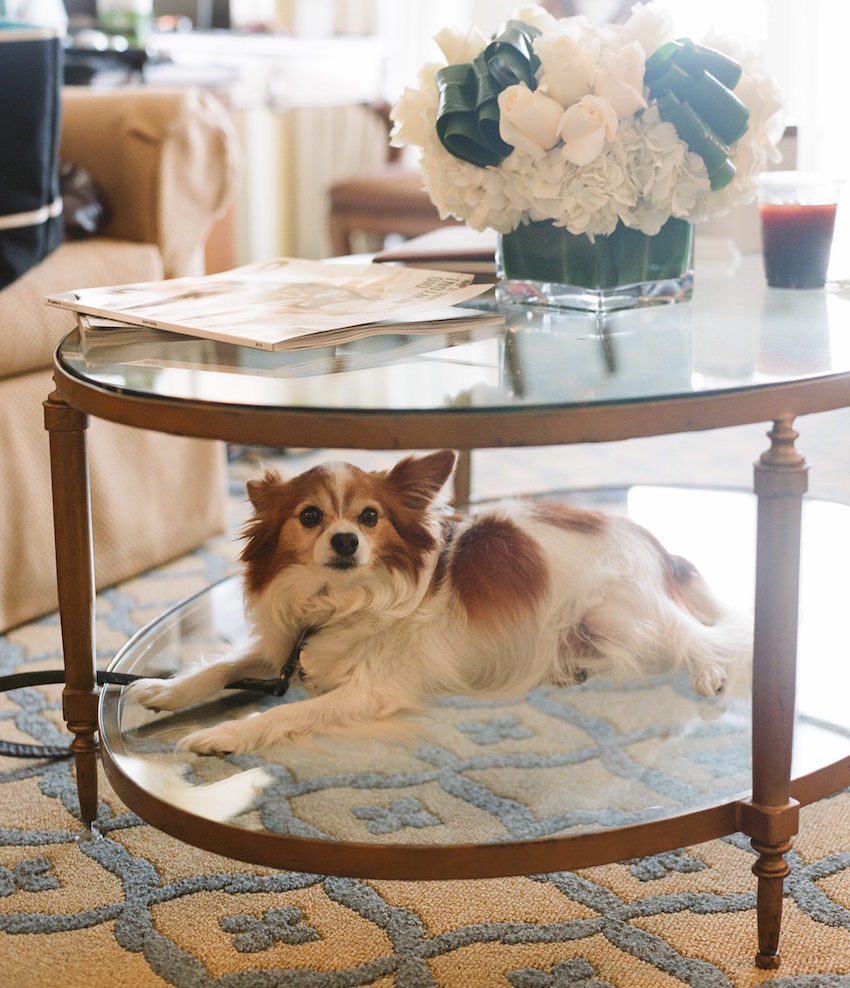 This sweet pup played watch dog on a glass coffee table while the bride and her bridesmaids prepared for the Los Angeles wedding ceremony. Photo by Elizabeth Messina 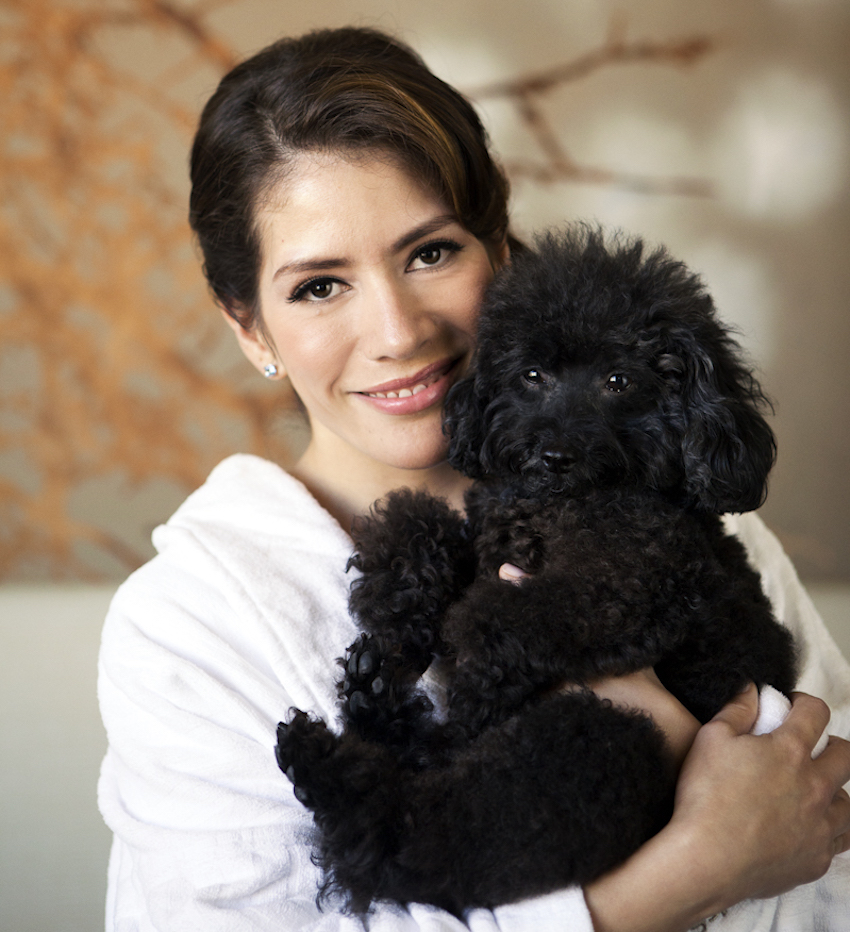 This bride felt it was important to include her black toy poodle Carmen in the big day, especially since she was a gift from the groom. "She's the love of our lives and we couldn't imagine her not being a part of the day," she says. Photo by Catherine Hall Studios 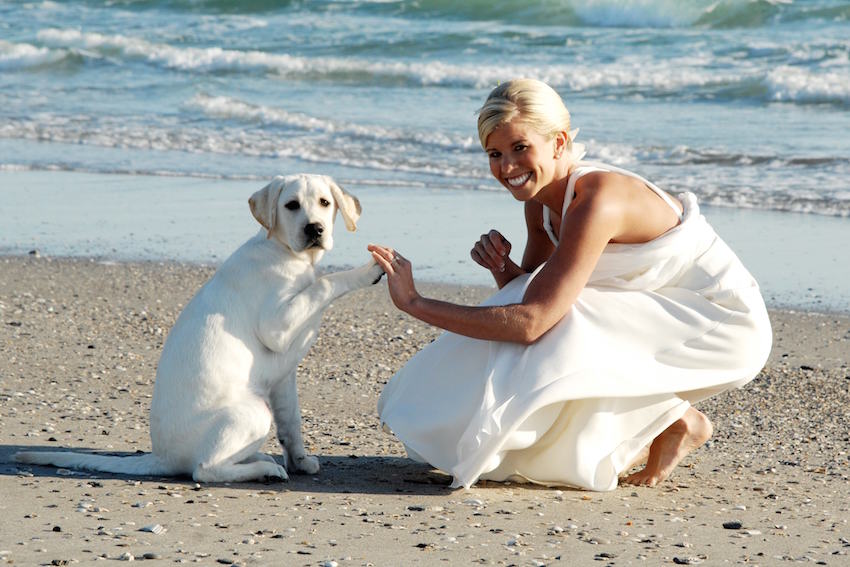 Prior to the reception, the bride made sure to bring her white labrador retriever puppy to a North Carolina beach for a photo session. Photo by Dara Blakeley Photography 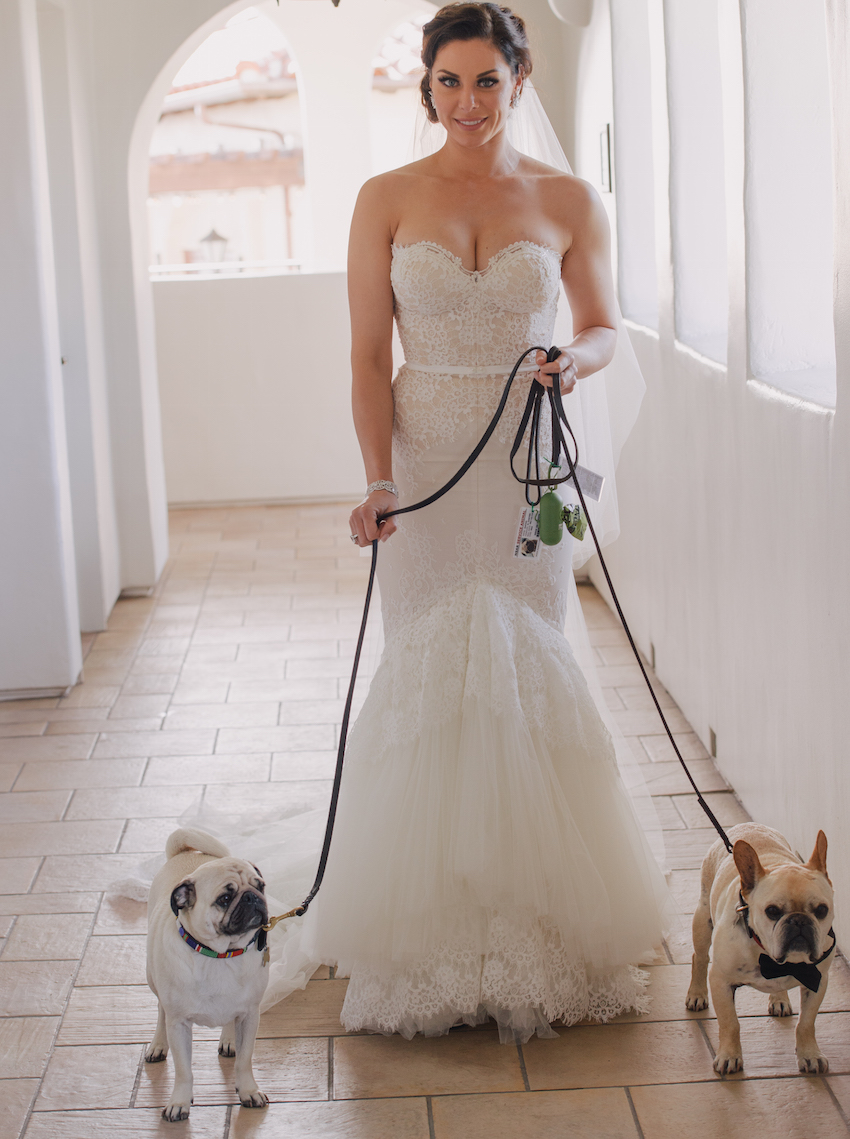 Lauren Kitt, the bride of Backstreet Boys singer Nick Carter, prepared the couple's two dogs – a pug and French bulldog – for the ceremony, where they carried the wedding rings on bone-shaped pillows. Photo by Kris Kan 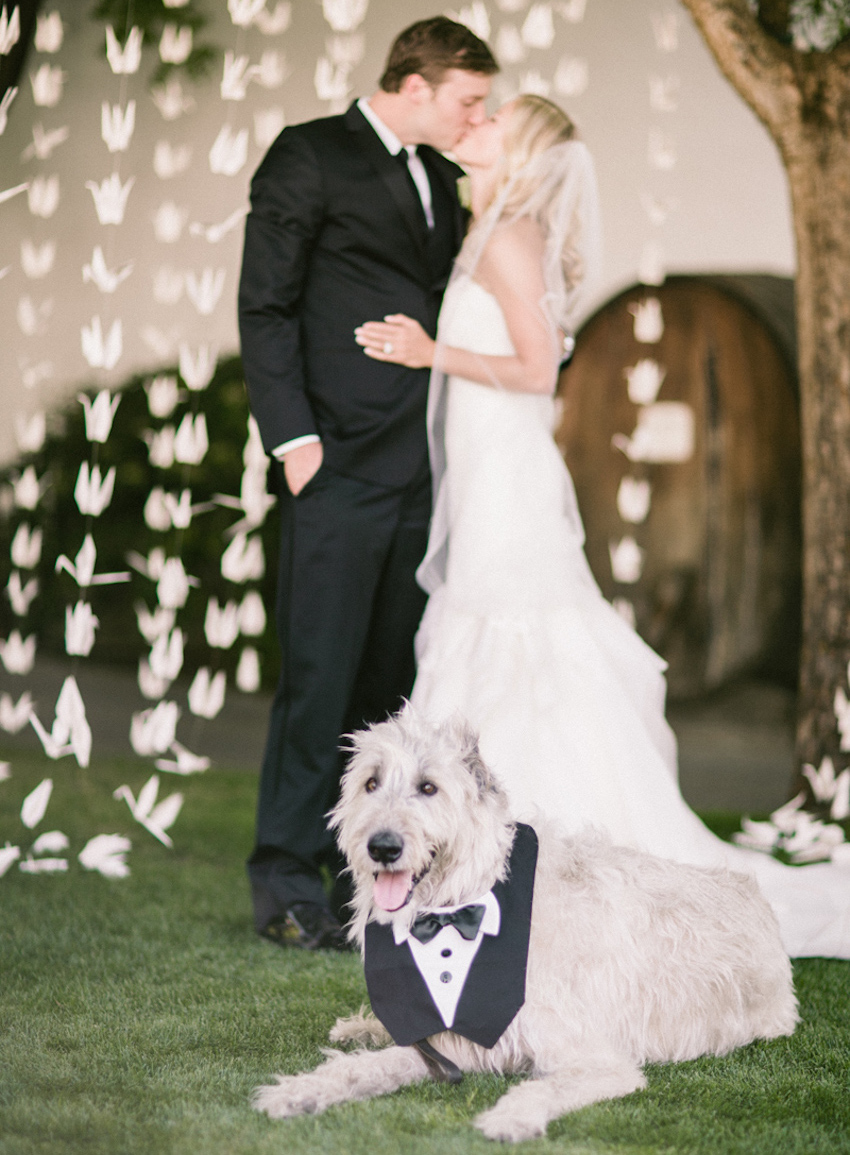 Since the couple's dog was involved in the proposal, they felt it necessary to also include Riley in the wedding day. He wore a tuxedo bib on his walk down the aisle, which was decorated with flower petals. Photo by Clane Gessel Photography 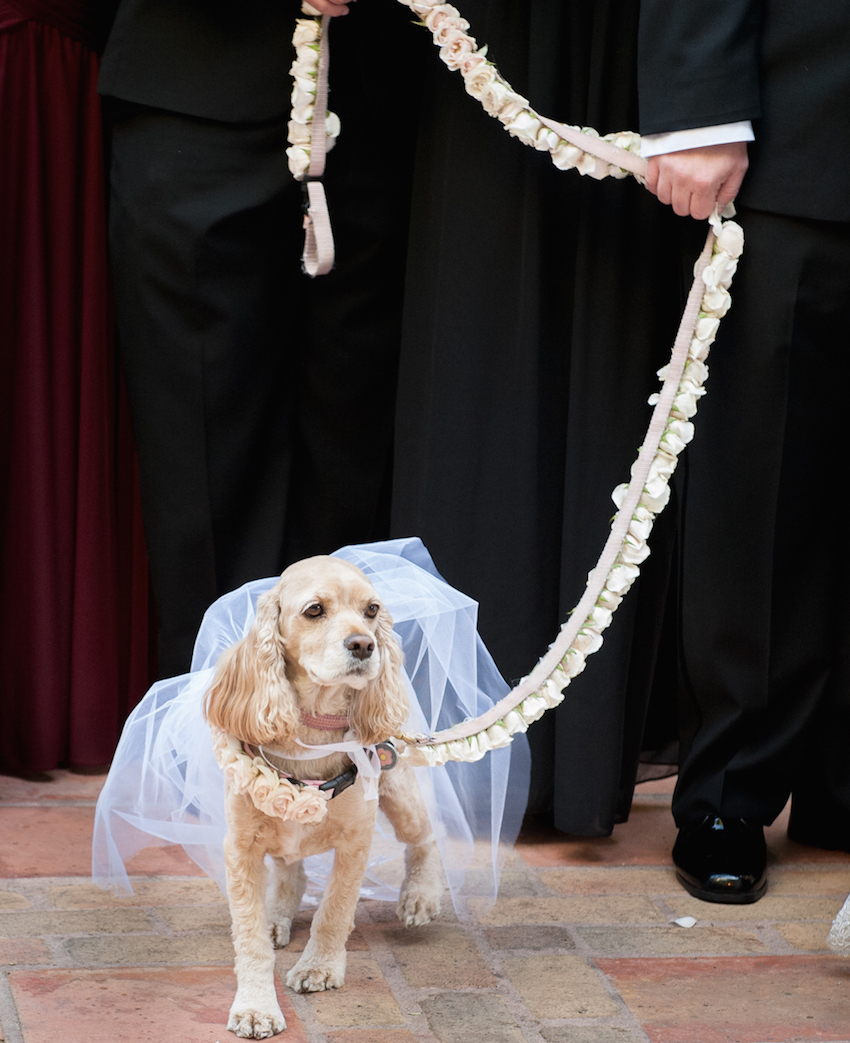 This adorable cocker spaniel was dressed like the bride in a tulle veil-like skirt and a collar and leash adorned with fresh, ivory roses! Photo by Handeland Tesoro Photography 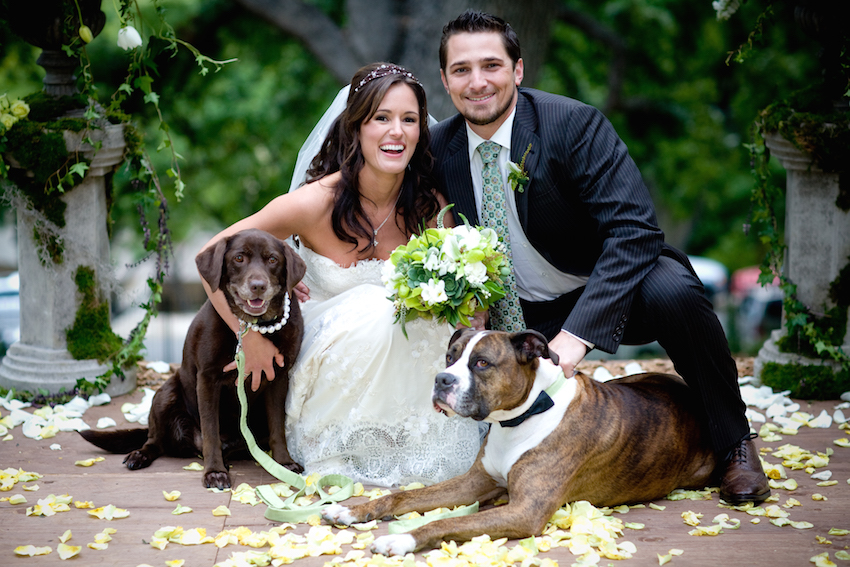 Since the couple's wedding was held at the home of the groom's parents, their chocolate lab served as a "flower dog" in a pearl necklace and their American bulldog stood as a ring bearer in a bow tie. Photo by Mi Belle Photographers 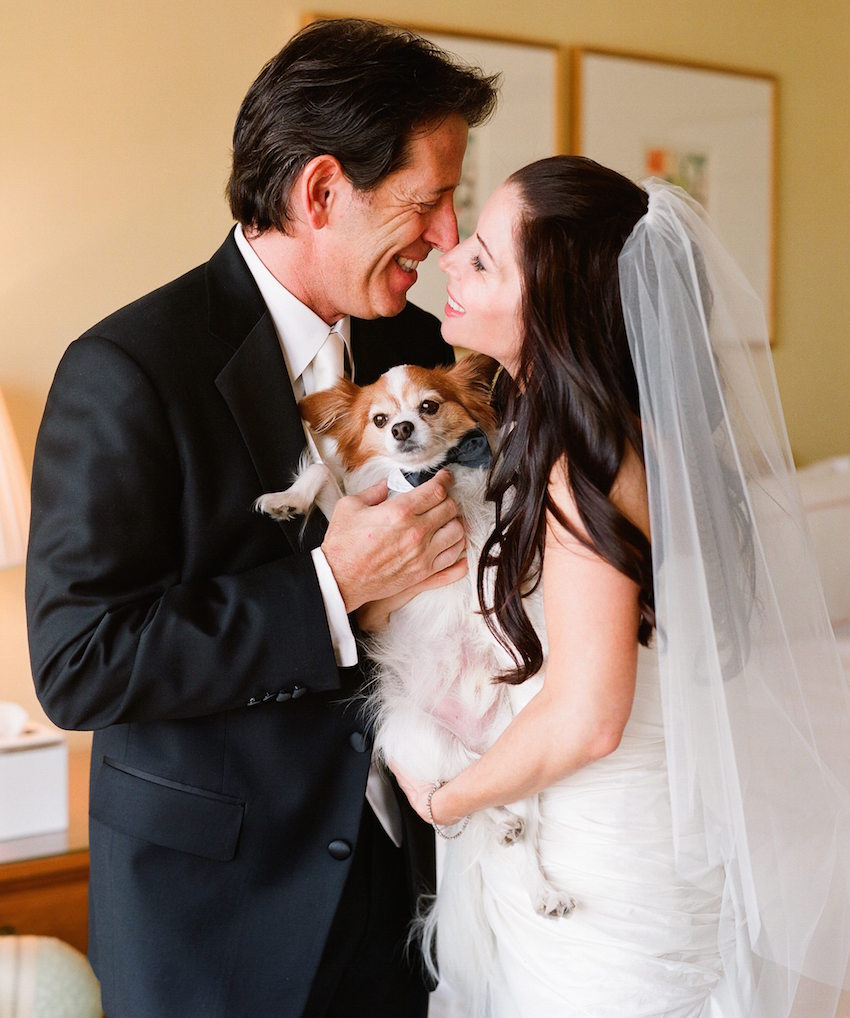 The bride met her groom while taking a walk with her beloved dog when her pooch ran up to the bench he was seated on and boldly jumped onto his lap. So of course, they included him in wedding portraits. Photo by Elizabeth Messina 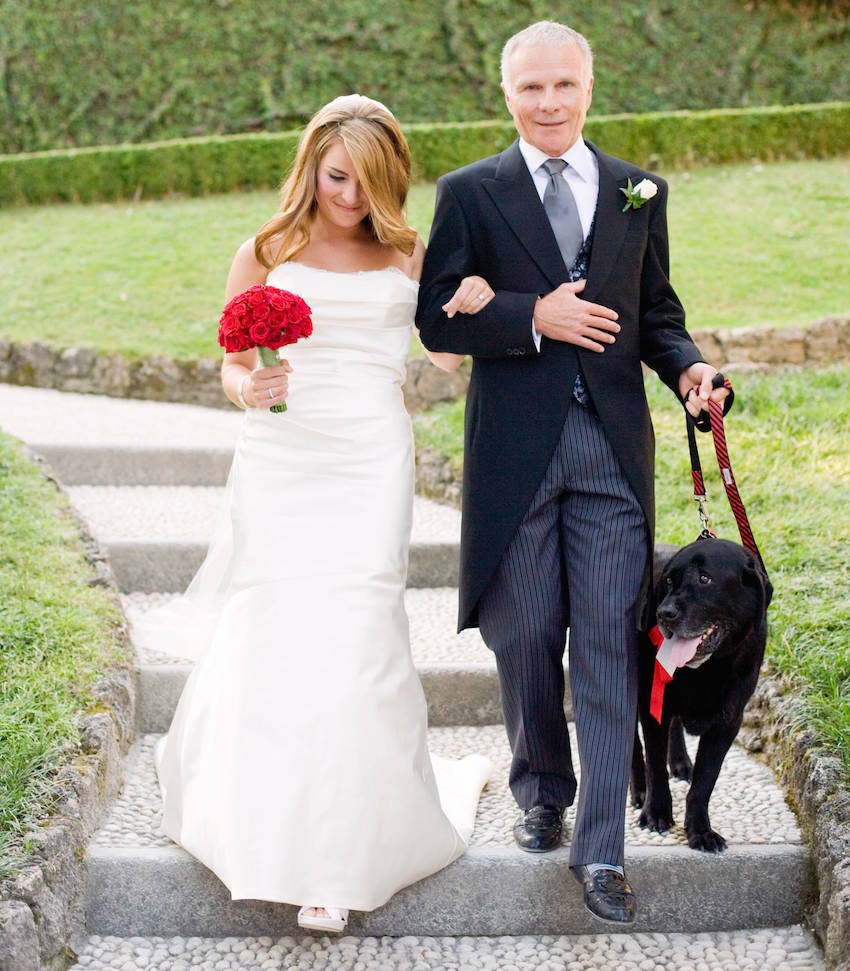 Despite the couple's destination-wedding location in Lake Como, Italy, this bride made sure her beloved dog walked her down the aisle along with the father of the bride. Photo by Corbin Gurkin 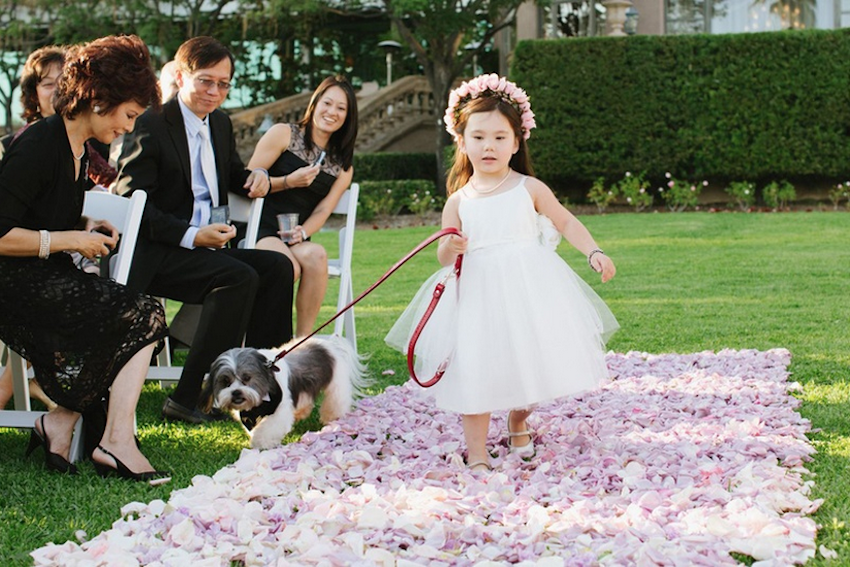 The couple's adorable pup was escorted down the aisle, which was strewn with pink flower petals, by a cute flower girl wearing a darling white dress. Photo by Marisa Holmes 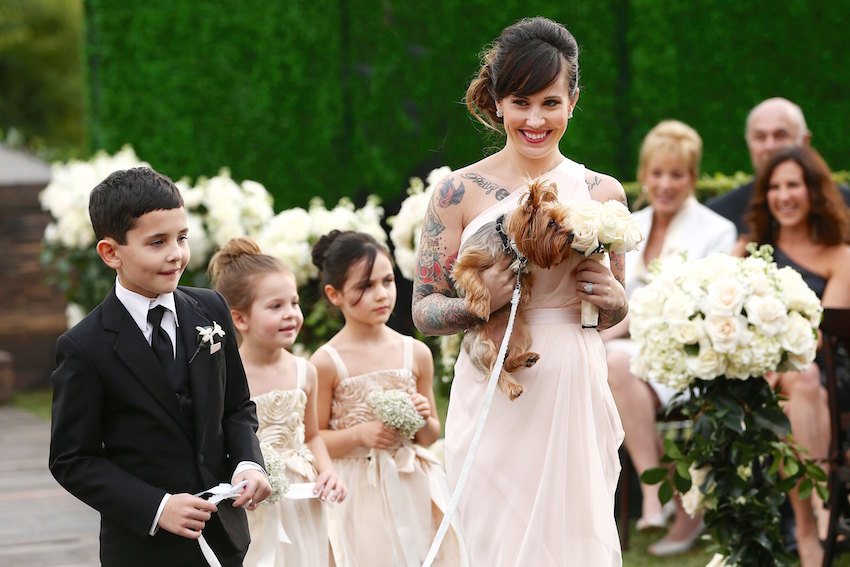 A Yorkshire terrier belonging to the bride – The Bachelorette's Ashley Hebert – was held by her sister (and maid of honor) as she walked down the aisle with the flower girls and ring bearer. Photo by Bob & Dawn Davis Photography 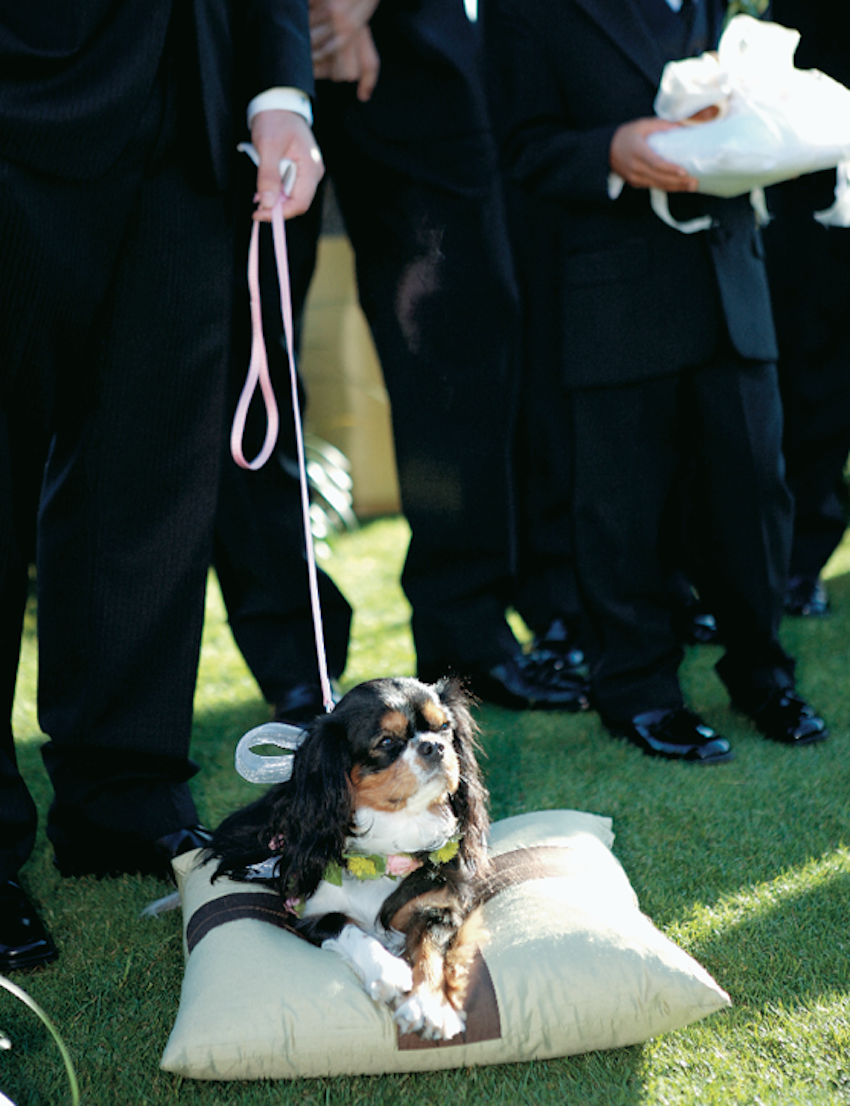 Taking part in the ceremony itself, the couple's Cavalier King Charles Spaniel rested on her own cushion while the bride and groom exchanged vows. Photo by Ira Lippke Studios 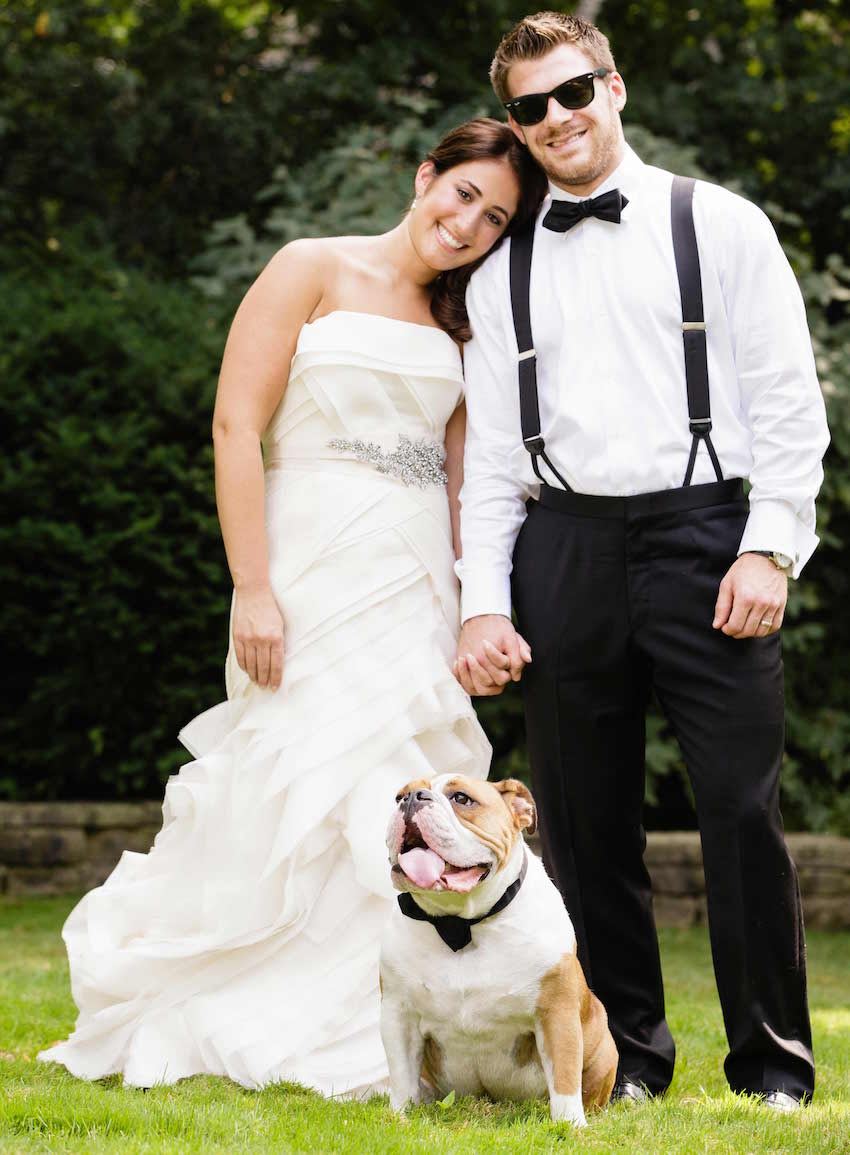 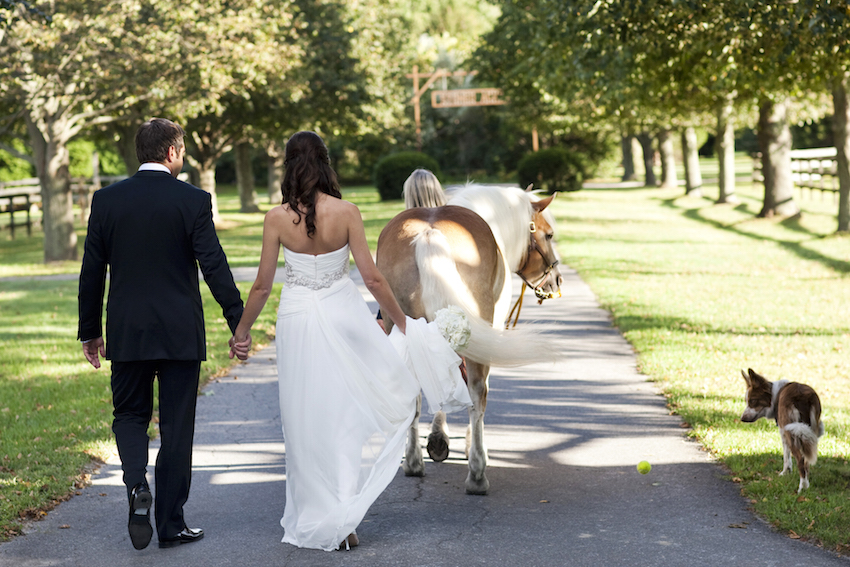 Following their vineyard wedding ceremony reminiscent of Tuscany, the bride and groom were led to the reception space by a dog – and a horse! Photo by Christian Oth Studio 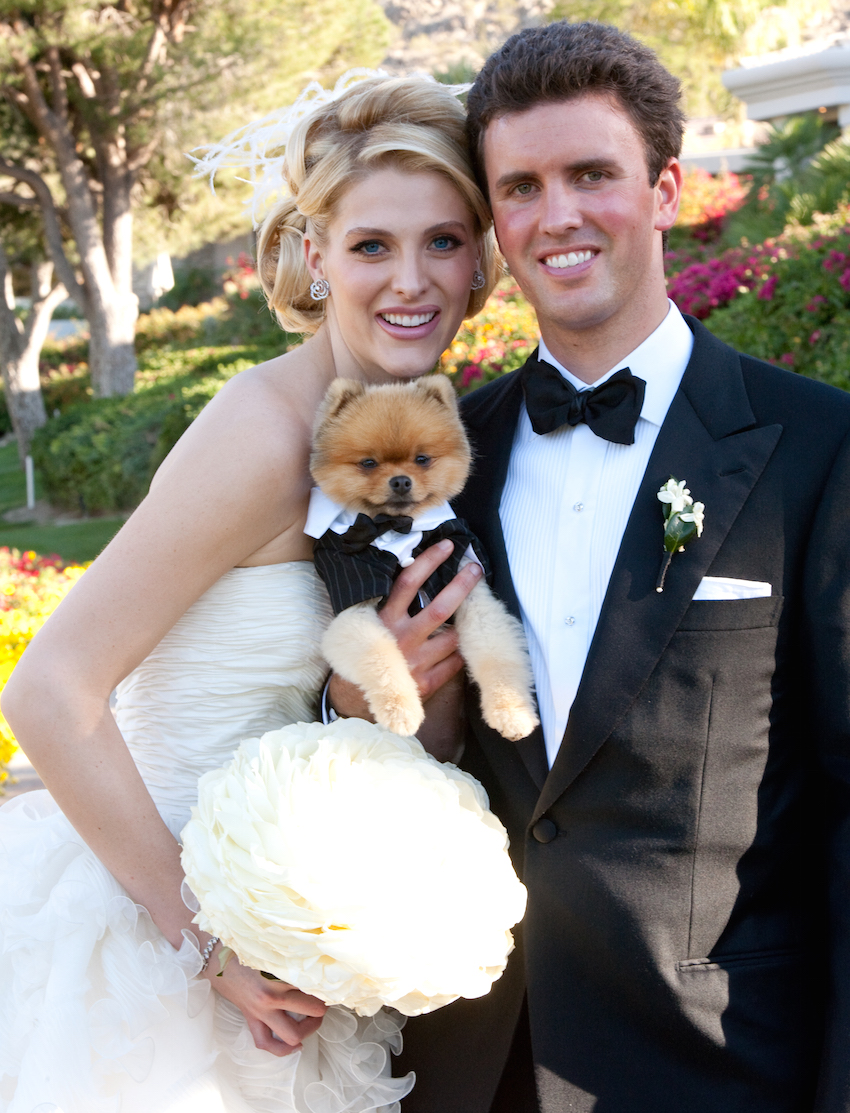 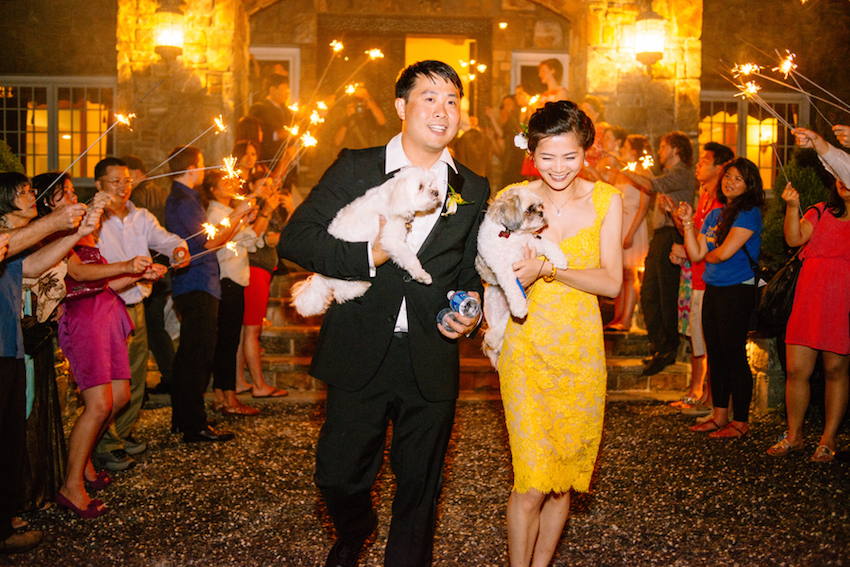 Since the couple's young pups ran around all throughout the ceremony, the twosome made sure to hold them close as they made their final sparkler exit. Photo by Jen Yuson Photography

A Realistic Timeline for Wedding Photography